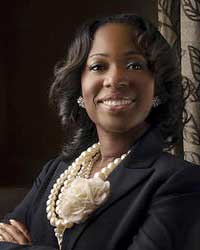 Lisa Chester is Executive Director of Warrick Dunn Charities, Inc. and a Strategic Planning and Senior Marketing Insight Expert. Lisa currently directs and manages the work and structure of national program initiatives that address the needs of underrepresented populations within at-risk communities in the areas of economic empowerment, affordable homeownership, wellness and children’s bereavement.

Born into a military family, she spent her early years residing in the Southeastern region of the United States and lived abroad in West Germany. After completing high school studies in Memphis, Tennessee, Lisa then attended the Atlanta University Center and graduated from Morris Brown College with a Bachelor of Arts degree in Mass Media Arts in 2003. She later received her Master of Business Administration in Healthcare Management in 2010.

While pursuing her undergraduate degree, Lisa began her career with Interpublic Group of Companies’ McCann-Erickson, ad agency and campaigned alongside Atlanta’s 59th Mayor, Kasim Reed, in 1998 when he was elected to the Georgia State House of Representatives.

Lisa champions education initiatives, public service and also programs that address the needs of women and girls. As a result of her work, she is also interested in addressing the challenges of working families and essential services for those in underserved communities across the nation. She enjoys volunteerism, led corporate responsibility efforts and served various organizations: Cystic Fibrosis Foundation, Girls Inc., United Negro College Fund, Atlanta Center for Self-Sufficiency, New Leaders Council Institute and more.

Lisa completed a fellowship of the New Leaders Council Institute-the premier national leadership and political advancement program and was named by The Atlanta Tribune as “The Ones to Watch” in 2014. In addition, she is honored to serve on the Board of Directors for the 2016-2018 term to help advance the mission of Ferst Readers.