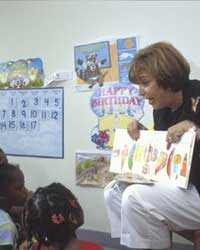 Listening to a local Madison, Ga. plant executive discuss the difficulty finding employees who could read at the required level for hiring, Robin Ferst was inspired to start the non-profit Ferst Readers in 1999, which she dedicated to fostering literacy and creativity in pre-kindergarten children.

Following a successful business career in Commercial Mortgage Banking, Real Estate development and Private Trust investment management, Robin lived in numerous cities before returning to Georgia and has once again selected her native Atlanta as her home.

Robin served as a member of the Georgia Public Telecommunication Commission Board of Directors and the Governor’s Commission on Hearing Impaired and Deaf Persons. She serves as a member of the Atlanta Speech School and the Georgia Partnership for Excellence in Education Advisory Board and. During her time in Madison, she served as a founding board member of the Community Foundation of Morgan County and initiated the Morgan County Early Childhood Reading Coalition -the pilot for the present day Georgia Rural Library Initiative.

Robin received the Georgia Retired Educator’s Assn. Educational Contributor Award in 2012, along with the Premier Academy’s 40th Anniversary Educator’s Award. In 2011, Robin received the “Big Voice for Children” award from Voices for Georgia’s Children as one of the state top child advocates. Also in 2011, Robin became the “ first” honorary member of PSI State Delta Kappa Gamma and became a Paul Harris Fellow of Rotary International.

Robin was featured in the November 2005 issue of Traditional Home magazine as a 2005 Classic Woman Award winner in celebration of her spirit of volunteerism. Among her other honors, she is an 11Alive Community Service Award recipient, a Shining Star of the Georgia Legislature and was designated as an A&E Community Hero in 2002 by Shirley Franklin, Mayor of Atlanta.

Robin’s passion for reading began early; at age six she was diagnosed with hearing loss and books became the most important part of her world. Books gave her a confidence that she might not have known otherwise. Reading opened up a world of possibilities and helped her overcome challenges to become a successful businesswoman. Although Robin is now profoundly deaf, she believes her accomplishments stem from a caring family who took the time to read to her and her ability to learn anything by reading.

On Christmas Day, the Saturday Evening Post featured an article about Ferst Readers' Founder, Robin Ferst Marhaver, in their series - Everyday Heroes. "Shelf Esteem: Giving books to Low Income Kids" written by Ken Budd talked about the history of Ferst Readers, how the program works and its growth over the past 20 years.