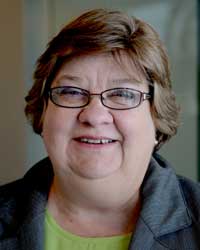 Nancy Hall has served as Interim Executive Director of Georgia Public Broadcasting since July 2004. Prior to being appointed to the Interim position by the GPB Board of Directors, she was the Director of External Affairs and served as the liaison to the Georgia General Assembly and Georgia's Congressional delegation for GPB. She also serves as President of the Foundation for Public Broadcasting in Georgia.

Before joining GPB in 1995, Ms. Hall served as Special Assistant to the Georgia State Superintendent of Schools, working in the area of public affairs and with intergovernmental initiatives, including serving as the Department's legislative liaison. During her years at the Department of Education, she was a co-chair of the executive committee of Family Connection and served on Governor Miller's Policy Council on Children and Families. Hall has also held positions with Mercer University in Macon, East Georgia College in Swainsboro, and University Publications in Blacksburg, Virginia.

Active in several education and children's organizations, Ms. Hall has served as president of the Georgia School-Age Care Association Board of Directors and as an ex-officio member of the Georgia Child Care Council. She currently is a member of the Board of the Georgia Partnership for Excellence in Education and the Georgia Peach Credit Union. She has participated in both Leadership Georgia and the Regional Leadership Institute. A native of Savannah, she is a graduate of the University of Georgia College of Journalism and is active in her church's mission activities. She is married and has one daughter who works with Atlanta Habitat for Humanity.